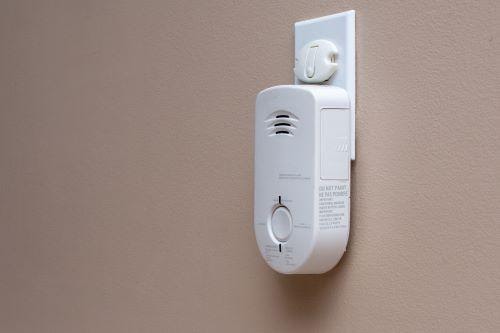 One of the most dangerous—and insidious—threats inside the home is that of a carbon monoxide leak. Invisible, odorless, and utterly toxic, carbon monoxide is a byproduct of the burning of the fuels used in heating the home. If it’s not properly vented outside of the home, it can build up undetectably and ultimately lead to tragedy. For this reason, it’s important to ensure that your carbon monoxide alarms are all in good working order and ensure you have your ventilation checked regularly, especially in the wintertime.

Carbon monoxide isn’t just a threat during the winter, however. Even during the heat of the summer, when you wouldn’t even imagine running your heater for any length of time, you should still take precautionary measures.

Carbon monoxide (CO) is a gas that consists of one carbon atom and one oxygen atom. With a density slightly less than that of air, CO is completely odorless, tasteless, and colorless. It’s produced by the combustion of many different types of fuels, making it a common byproduct of heating systems and other methods of human industry.

While the gas dissipates harmlessly if it’s properly vented into the outside air, if it is breathed in, it can cause an acute condition known as carbon monoxide poisoning. The carbon binds to the hemoglobin in the human bloodstream, preventing the blood from carrying oxygen, creating a dangerous and potentially lethal effect.

Because carbon monoxide is tasteless and odorless, it’s possible to breathe in a large amount of it before realizing there is a problem. Ultimately, though, it will lead to flu-like symptoms: chest pains, weakness, nausea, vomiting, and confusion. Beyond that, it can lead to seizures, loss of consciousness, arrhythmia, and eventually, death. The biggest risk is to people who are sleeping inside the home, as they can die from carbon monoxide poisoning without ever waking up.

Preventing carbon monoxide poisoning is largely a matter of maintenance as well as common sense. Since it’s produced by the burning of fossil fuels, it’s important to never use any fuel-burning appliances inside the home without proper ventilation. This means charcoal grills, camp stoves, and emergency generators should always be used outside of the home, no matter how cold it becomes indoors. Similarly, you should never run your vehicle inside of the garage, as car exhaust also contains dangerous amounts of carbon monoxide.

With regard to home heating systems, carbon monoxide is produced by fuel-burning heaters, including those that utilize coal, natural gas, propane, and others. Without proper ventilation, it can enter the home, which is why it’s important to have an HVAC professional regularly check your chimney, ducts, and other areas where gas should be vented out of the home.

If your carbon monoxide detector goes off or you have any reason to believe carbon monoxide might be an issue in your home, first, get everyone out of the house immediately. Then, call emergency services.

We mentioned that anything that burns fossil fuel can produce carbon monoxide. While this threat is at its largest during the winter months, when furnaces are generating this lethal gas at a nearly constant rate and the windows and doors are shut to keep the cold away, the arrival of summer brings with it plenty of reasons for people to be utilizing CO-generating devices as well.

The first risk comes from the fact that all the doors and windows are still shut to keep out the summer heat. The air conditioning itself doesn’t generate carbon monoxide, but appliances such as the washer and drier certainly can. There are also plenty of outdoor activities that generate CO. For example, it can be a problem during tent camping, when people attempt to use heaters to warm their tents. Similarly, it can be generated by the exhaust from trucks and boats. People sitting too close to the exhaust vent can be vulnerable to CO emissions.

Summer heat also leads to power outages, which often forces homeowners to rely on gas-powered generators. These generators also produce carbon monoxide, which if not properly vented can also seep into the home. For this reason, it’s critical to never run a generator inside of a house or garage.

The best way to prevent carbon monoxide poisoning, besides having a dedicated alarm system, is to ensure your HVAC system receives regular care and maintenance. All it takes is one faulty vent for a potentially tragic buildup of CO to occur, so you should have each element of the heating and ventilation system inspected at least once a year.

A thorough inspection should include the chimney. It must be free of debris, as should the fireplace flue. It should also include any vents in the home. Something as simple as a buildup of too much dust can block the proper ventilation of carbon monoxide. The equipment itself should also be thoroughly inspected. This means not only the larger, more obvious elements, but also smaller parts such as pilot lights, which can also produce carbon monoxide.

Finding the right HVAC technician to do this work for you is a bit of a process in and of itself. You’ll need to find someone with the proper certifications, experience, and who has plenty of satisfied customers. One great example if you live in the Pacific Northwest is Entek. Entek has 75 years of experience ensuring homes are safe from carbon monoxide buildup during the summer, winter, and every other season as well.

Useful Things to Have in Everyday Life

How to Make Your Jewelry Last Longer

Brilliant life Skills To Develop in Your Free Time